Since then, a second Unit has been built on the site and many upgrades and renovations have taken place to make the Kindergarten the wonderful centre that it is today. 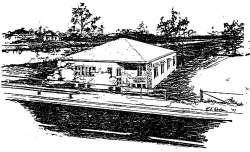